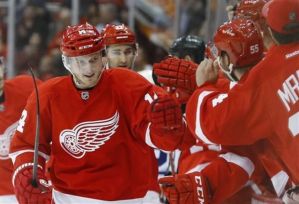 Though Gustav Nyquist is tearing it up on the ice and making frequent appearances on the score sheet, he is still not leading the Red Wings in points this season. Nyquist is tied with Daniel Alfredsson and Niklas Kronwall for second on the team with 45 points. Henrik Zetterberg currently leads the Wings with 48 points through the 45 games he has played.

While Detroit has been plagued by injuries this season, they have relied on several players to lead the scoring punch. Nyquist, Alfredsson, Kronwall, Zetterberg, Johan Franzen, Pavel Datsyuk, and Tomas Tatar have all stepped up in a combined effort to keep the Red Wings in the playoff hunt. Though Detroit is scoring, no one is the stand out leading scorer.

Actually, Detroit’s leading scorer at the end of the regular season this year may have the lowest point total of any Red Wings’ leading scorer since the implementation of an 80 (or 82) game schedule. It’s just a matter of who leads the team at the end of the year. The previous lowest point total was 59 points be Walt McKechnie during the 1976-77 season. That season, the Dead Wings went 16-55-9.

This year’s lack of scoring is a bit of an anomaly. Detroit is having a much better season in comparison with the 1976-77 Red Wings team. Though this season is not up to Red Wing standards, we are still in the playoff hunt and have the potential to do some damage if we reach the playoffs. In addition, McKechnie scored his 59 points in 80 games, which translated to 0.74 points per game (ppg). Zetterberg is scoring over a point per game, but has missed time due to back injuries. He would score 87 points in a full season. Datsyuk (0.85), Alfredsson (0.71), Franzen (0.79), and Nyquist (0.90) all would be having better seasons had they not missed time due to injuries or time in the minors. Chances are that they would all score over 59 points this season with all 82 games under their belt. But that’s not how things work. Someone may make history this year with the lowest point total to lead the Red Wings in a non-shortened 82-game season.

Detroit has not had someone step up and dominate the scoring for the team, and even the league, in recent history, but they do score goals. I think this bodes well if they can squeak into the playoffs. A healthy Pavel Datsyuk and Henrik Zetterberg will certainly help too. Gustav Nyquist is leading the team now, but the scoring has otherwise been pretty diverse, and that will be hard to defend against come playoff time. Mike Babcock used to split up Datsyuk and Zetterberg so the opponent’s shutdown line had to focus on one player, not both. Now, those two aren’t even in the equation, but could be for the playoffs. Imagine a world where a line with Datsyuk and Zetterberg isn’t the main focus of the opponent’s defense?