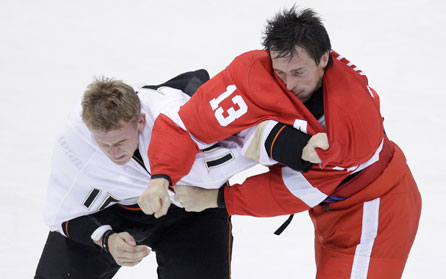 It is expected that Pavel Datsyuk and Daniel Alfredsson will return to the Red Wings’ lineup today after missing time. Alfredsson only missed one game and Datsyuk has been out since the Winter Classic for the most part. It’s great that the team is getting healthy in time for the playoffs, but one thing I wonder is what if the team was completely healthy this season?

Generally speaking, teams like Anaheim, Boston, and Colorado have all had decent luck when it came to injuries this season, though no team can make it through the season completely unaffected by injuries. What if Detroit had that same luck? What if Datsyuk, Johan Franzen, Henrik Zetterberg, Jonathan Ericsson, Stephen Weiss, and Darren Helm had been healthy and played around 70 games up to this point?

What are the consequences of having a healthy team?

At this point, are these injuries hurting the team or a blessing in disguise?